2. The Wabbit in Engine Room One 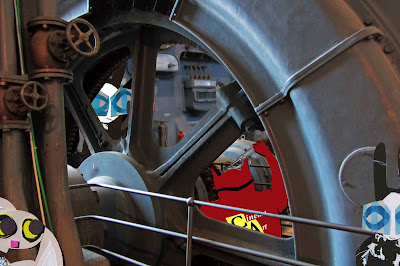 Quantum hung in space while the Wabbit shrugged his shoulders round and round. He regretted Engine Room One was less than comfortable and made a mental note to design in two armchairs, a couch and a colourful rug. He was responsible for developing Quantum's Lattice Drive, which technically speaking wasn't quite ready. He had got it thus far by raiding junk yards and the many dumpsters to the rear of the European Space Agency. Then, working alone at night in his shed, a Fibonacci super-lattice had followed, initially fashioned in curly carrots and celery, and later constructed from neutron star leftovers. The Wabbit heard metallic sounds and poked his head round a boiler. Skratch the Cat was measuring something and muttering about problems with Brown Boveri circuit breakers. "Skratch" yelled the Wabbit at the top of his voice. Skratch didn't as much as look up. Instead he inserted two small springs and checked tolerances. "This is a 1987 unit, Wabbit. They don't last forever." "What the binky are you doing here?" screamed the Wabbit. "It's hush hush," meaowed Skratch. The Wabbit sighed. "At least we have the same information source." Skratch continued measuring. "Skratch, you're a stowaway," said the Wabbit. "Nah," said Skratch. "I'm a supernumerary." The Wabbit hid a grin. "Union card check!"
at October 19, 2016