5. The Wabbit and the Bone Stampede 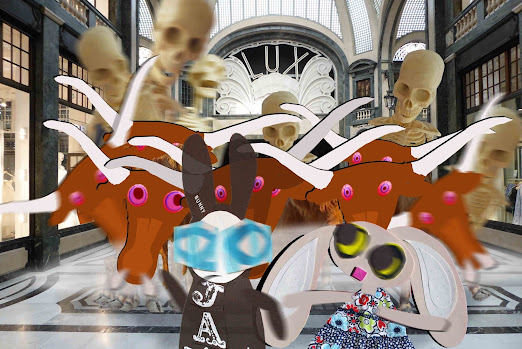 They were running again, but choices were limited. The skeletons spooked the steers and the steers started to charge. They poured from the cinema with skeletons in close pursuit. The Wabbit and Lapinette dived for the main exit but found themselves in front. The Wabbit glanced back. "Double jeopardy!" he yelled and they both hurtled forward. They were deafened by the thunderous roar of cattle hooves. Skeletons wailed like the banshee in a bad mood and made the arcade shake. Glass rattled in every shop window. Hot breath steamed from the nostrils of the Devil's Herd. "The small rabbit will help us," mooed a steer. "He will," mooed another. "He knows what to do," mooed one more. The Wabbit heard them - but of what to do, he had not the slightest notion. He puffed and panted and glanced sideways at Lapinette. "Any ideas?" "Grind their bones," yelled Lapinette. "They don't compost well," frowned the Wabbit. "Hard to get rid of," shouted Lapinette. Suddenly the Wabbit turned. With a swirl of dust, the herd and skeletons slithered to a halt. "You skeletons are dangerous," shouted the Wabbit. "I'll make no bones about it." "Prepare to meet your doom," shouted the skeletons. The Wabbit shook his head and smiled with all of his 28 teeth. "I've been preparing to meet it for years. Now it's your turn ..."
at October 05, 2016