4. The Wabbit and the First Device 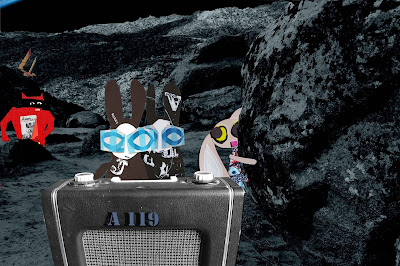 Susan pretended to crash land and they all made their way across the rocky surface.  "Wow, look at these boulders," said Lapinette. "Just like Stonehedge," winked the Wabbit. "Up ahead, Wabbit," called Skratch from a nearby rock. They rounded the remains of a large meteoroid and there it was - a basic looking device, with knobs and numbers. "It looks early, Commander," said Wabsworth. "I'm uncertain of its stability." The Wabbit stretched out a paw and probed a knurled knob. The device burst into song. "I'm being followed by you moon shadows," it warbled. The Wabbit nudged Wabsworth and grinned. "There's your date. It's 1971." "Moon shadows, moon shadows," trilled the device. "Can you please shut it off!" yelled Lapinette. But the device kept singing. "It's a droid," sighed Wabsworth. He bent close and whispered urgently. "Command Line 76. Execute Bootstrap. Information Protocol 119." "Hello," said the device. A light blinked. Then a series of lights. Then a buzzer. "Connected," said the device. The Wabbit speculated on the connections, but he knew the answer before the device spoke again. "This is Unit 1, Hello. Hello Unit 2, Hello. Hello Unit 3, Hello." Wabsworth suddenly grabbed the device and hoisted it onto his shoulder. "Cut the courtesy calls and take me to the others," he growled.
at October 24, 2016