1. The Wabbit and a Danger Directive 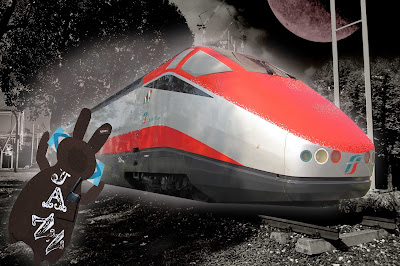 The order had come straight from the Department of Danger and couldn't be ignored - so on a night lit by a shadowy moon, the Wabbit crept stealthily towards Quantum the Time Travelling Train. The radio crackled. "Who goes there?" "Danger," replied the Wabbit. "What kind of Danger?" crackled the radio. "Danger of a buying me dinner," answered the Wabbit. "Welcome Commander," said Quantum. "I'm jumping to Lattice Drive in thirty seconds. Counting." Quantum began to throb. Trees shook. Grass quivered. The shadowy moon seemed to sink lower in the night sky. The Wabbit powered his hind legs and leaped for the door. Engine Room One was a series of blinking buttons and swinging dials. The Wabbit strapped himself in to the only seat available. "How far are we going?" he asked. "Not so very far," said Quantum. "Information?" asked the Wabbit. "Hush hush," said Quantum. Everything vibrated, including the Wabbit. The noise became unbearable. An onlooker would have seen Quantum compress to a tiny dot and vanish. But some 32 earths away in empty space, a high speed train appeared with the Wabbit on board. He released his straps and listened to the silence. But he could hear fractured sounds of hushed conversation. "Space debris?" queried the Wabbit. "Stowaways," said Quantum. "At least there's no mice," shrugged the Wabbit.
at October 17, 2016