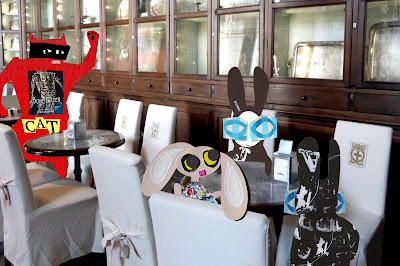 Skratch the Cat arrived and the Wabbit watched him reflected in the corner of his glasses. He pretended not to notice. "Where's Skratch with his question?" he said impishly. Skratch knew the Wabbit could see him and he pretended not to notice too. So he let out a sudden meow. "I have the question!" The Wabbit bent forward and whispered. "It was all a question of reflexivity." Skratch had very good hearing, but he pretended not to hear. His purr was an agreeable one. "I expect you're all wondering what sort of adventure you were in." Lapinette jumped in. "It was all a question of reflexivity!" She glanced at Wabsworth - who posed oratorically. "The adventure acknowledges the adventure-making process," he proclaimed, "subtly imagined in its deliveration." Skratch was delighted. "Elegantly put, my good lagomorph." Lapinette giggled and her ears flounced from side to side. "There's no such word as deliveration." Skratch scratched the table lightly. "In film theory, there is!" he insisted. The Wabbit's tone was critical. "Is that the same as structuration?" Skratch nodded. "Not quite. Deliveration is the final endation of structuration." This kind of talk was making Lapinette thirsty. She raised a paw and a waiter appeared instantly. "Four aperitivi, please." "Immediate deliveration?" asked the waiter.
at October 14, 2016