3. The Wabbit and the Bone Riders 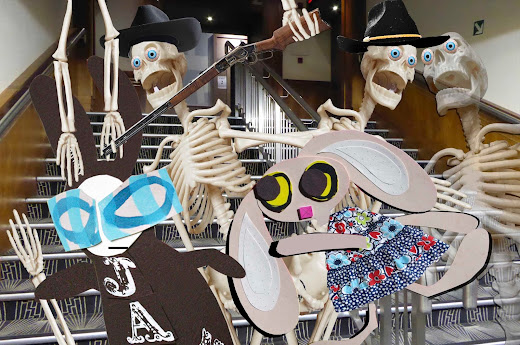 The Wabbit suggested taking the cinema stairs but suddenly they were behind them. There were dozens of skeletons and they kept coming. They moaned, they groaned they rattled - and worse than that, they sang. "Skeletrons!" yelled Lapinette. The Wabbit knew Lapinette pronounced skeletons that way and never had the heart to tell her. A bullet from a Winchester span past the Wabbit's ears and ricocheted from the wall. "Hate" shouted one skeleton, "Murder," shouted another. But the last skeleton grasped at the Wabbit's paw and shouted "Revenge!" The Wabbit fur stood on end. He made for a corridor that led behind the screens and he pulled Lapinette along with him. Two skeletons put their skulls together and warbled. "Oh where's the devil's herd? Who took the devil's herd? We'll ride across the burning sky 'til we find the devil's herd." The sound of snorting steers issued from their ghastly mouths and their hot breath coursed down the stairway. Their bones rattled as all the while as they chased the Wabbit and Lapinette as they stampeded through turning after turning. "Get the rustlers!" shouted a skeleton. "We're gonna cook you over a campfire," shouted another. "With beans," shouted a third. "Skeletrons can't cook," yelled Lapinette over her shoulder. The Wabbit looked for a door and rummaged in his fur. "What are you looking for," yelled Lapinette. "Skeleton key," shouted the Wabbit.
at September 30, 2016