6. The Wabbit and the Hob Goblins 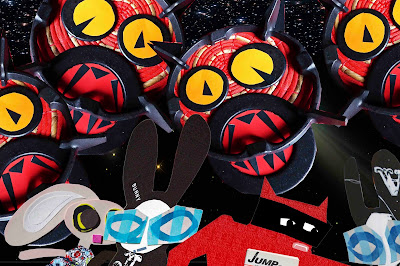 "Run!" shouted the Wabbit.  The Hob Goblins were huge and they bore down on the team with fiery fur-burning breath. "I'd forgotten what day it was!" yelled the Wabbit. "Hallowe'en!" shouted Lapinette. "Samhain!" added Wabsworth, who was rather out of breath for an android. Skratch the Cat said nothing and saved his energy for leaping and pouncing. "Is this the Nocturnal High Garrison of Tribulation?" asked Lapinette. "I don't think so," puffed the Wabbit. "they're just an added bonus." Wabsworth hopped to the side and glanced over his shoulder. "Hobgoblins are mischief makers, not serious contenders."  A bolt of searing heat touched his ears. "We're cooking tonight, earth rabbits." shouted the Goblins. The Wabbit was tired of running and suddenly wheeled around. "DWA!" he yelled. "Stop right there." The Hob Goblins came to a halt and heat fizzled out. Gradually, they faded until nothing remained but a faint smell of hot metal and singed fur. They all looked around. "What next?" asked Skratch, "A visit from the BunnyMan and his axe?" suggested the Wabbit. Lapinette sighed. "I'd rather meet the BunnyMan than the Nocturnal High Garrison of Tribulation." A sudden crash of an axe made them jump. "Now's your opportunity!" moaned a voice. The Wabbit looked at Wabsworth. He shook his head. "That wasn't me." Wabsworth looked at Lapinette. Lapinette shrugged and looked at Skratch. "He's real and he's here," meaowed Skratch.
[DWA: Dept of Wabbit Affairs.  The BunnyMan: https://en.wikipedia.org/wiki/Bunny_Man ]
at October 31, 2016