3. The Wabbit and an Overdue Mission 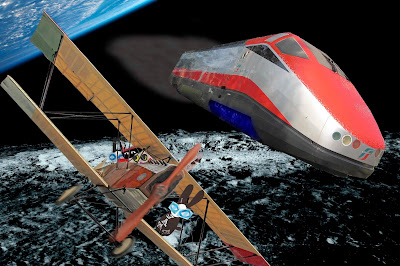 The Wabbit looked down. "Anyone knows what's going on?" "Only me, Commander." Susan the Biplane swooped from Quantum's hold and dived towards the moon's surface. "Susan! You're Hush-hush?" gasped Lapinette. "In person," said Susan. The Wabbit shrugged. It was all he had left to do. "Everything operational, Susan?" "Bio-atmosphere, gravity field, shield, stealth cloak," said Susan, "And that dive angle thing you bolted on." The Wabbit squinted down at the rocky surface. "Hit me!" Susan skimmed across several craters. "I have sealed orders from the Department of Danger." The Wabbit nodded to Lapinette. She rummaged in the cockpit and found an envelope behind the remains of a salad sandwich. She scanned the contents. "Something we forgot, Wabbit." The Wabbit's tummy rumbled. "Not the sandwich," hissed Lapinette, "unfinished business." The Wabbit slapped a paw to his forehead. "Project A119." "Where there is Project A119, there is the Nocturnal High Garrison of Tribulation," breathed Wabsworth. "NiGHT," meaowed Skratch. "As sure as the day is long," quipped the Wabbit. He continued to stare, as if by effort alone he could see the craters where the three warheads were hidden. "The warheads were detonated," he mused. "Officially," sighed Lapinette. "No record," commented Wabsworth, who had android access to most records. "Do your stuff, Susan," nodded the Wabbit. Susan dived vertically. "Stall stall stall ..!"
at October 21, 2016