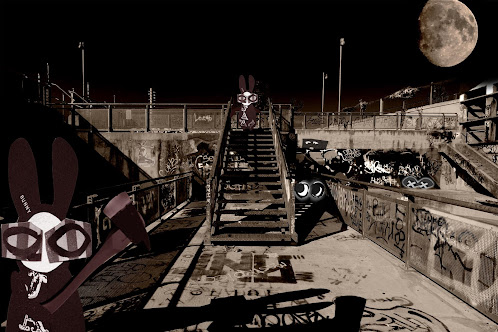 It was Hallowe'en and the moon stared relentlessly down on the old abandoned power station, where they'd arranged to meet at midnight for a Hallowe'en party. The Wabbit thought it seemed more desolate than usual and he gingerly took a step down the iron staircase. "Hello?" he shouted. It wasn't much of a shout, more of a loud whisper that crept along the railings and vanished. It was then that he made out the shape. It looked like a large rabbit with an axe and the Wabbit's heart lurched. "The Bunnyman!" He stepped back up the staircase. The Bunnyman's claws rasped along the axe shaft until they made a metal chink at the top. The Wabbit shuddered. "Monsters are real," he muttered and felt in his fur for a weapon. All could find was a dangly skeleton from the supermarket and a bit of black bun that had seen better days. The Wabbit kept calm. "He doesn't come until midnight. Only then can he dismember us all." From some distance away he heard faint church bells and he counted them. It was midnight. But the Wabbit heard something else too. It was just a movement but curiosity proved too much. He hopped down the steps. Eyes looked at him from everywhere and a deep voice spoke. "Push the Bunnyman, push him now!" "I'll get him!" yelled the Wabbit and he took a running jump and kicked him. With a crump and a clatter the figure fell over and the Wabbit blinked. It was a life size cardboard cut-out of himself. "That'll teach him!" yelled the Wabbit.
at October 30, 2015