7. The Wabbit Under Ground 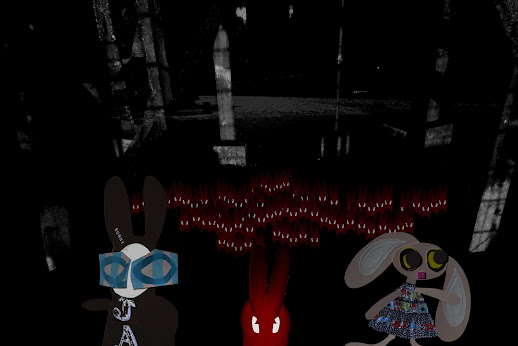 "If there's a way in," said the Wabbit, "there's a way out." It was a Stygian space and the Wabbit half expected a ferryman. So he rummaged in his fur for his emergency coin and splashed through the waters in search of an exit sign. Of the three, it was Magic Red Rabbit that looked determined. With a thousand red rabbits following, he felt responsible and refused to be scared. But Lapinette scowled. "What about Plan B?" She was damp and cold and had no fur drier to paw. The Wabbit smiled with fake cheer. "The team has our coordinates." "Can they track under ground?" asked Lapinette. The Wabbit wasn't certain but didn't say. Water ran down the pillars. It wasn't a torrent but its level in the cavern was getting deeper. "Humidity sullies my fur," muttered the Wabbit. Lapinette said nothing but she knew her fur would shortly look like dreadlocks. Then Magic Red Rabbit's ears did something strange. "I can hear something." "Stop!" said the Wabbit. Behind him, four thousand paws came to a sudden standstill. Lapinette listened but could only hear the steady drip of dank water. Red Rabbit looked from left to right and straight up. "I heard someone swear." The Wabbit couldn't hear a thing and he shook his head. "What kind of swearing?" "Polite swearing," said Red Rabbit. "Like 'shoot the fruit'?" offered Lapinette. Red Rabbit nodded. "They're here!" whispered the Wabbit. He was about to shout when Lapinette put a paw to her lips for silence. Nodding, he pulled a small bottle of prosecco from his fur, opened it and sprinkled it around. "Emergency Beacon," he whispered.
at October 05, 2015