6. Skratch, Jenny and Wabbit Plan B 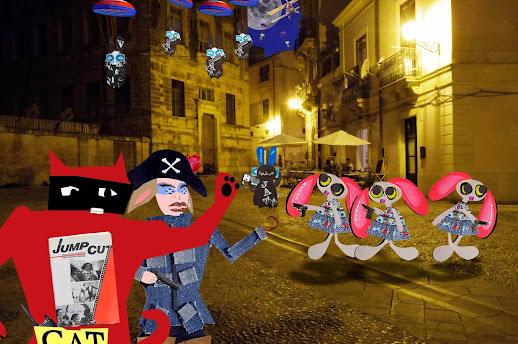 It had been a quiet night in the little town. But a radio crackled and that was all it took. A squadron of the Wabbit's private guard poured from the sky casting shadows that looked like giant locusts. Lapinette's personal guards - Fitzy, Mitzy and Tipsy - checked weapons and looked around in a hostile fashion. "Gosh," said Mitzy. "Fiddlesticks," said Fitzy. Tipsy said something unmentionable and swayed alarmingly. "I have a lock on their coordinates," said Skratch the Cat. "Distance?" asked Jenny. "Ten klicks," said Skratch, "but the facility is below ground." "Sheeps' shibblets, we need ropes," said Mitzy and she tore several rectangular strips from her frock. "The squadron has ropes," smiled Jenny. Skratch growled. "A coded message from the Wabbit said there were more than a thousand red rabbits kidnapped and held in a dark place." Jenny looked sceptical but Skratch nodded. "It was written on the back of a betting slip, crumpled and thrown on the sidewalk." Jenny waved her hook and sighed. "Did this message say who did the dirty deed?" "Something about the Paws of Darkness," said Skratch. "Ah!" said Jenny. "What kind of Ah?" answered Skratch. "It's an organisation," said Jenny. Skratch looked puzzled "Not real paws then?" "They're real enough." said Jenny. "Those whom the Paws touch are forever in bondage." "Son of a Sausage!" gasped Fitzy. "Double deep fry them for their trouble," snapped Mitzy. Tipsy spat out a series of expletives that made Jenny's fur stand on end.  Skratch looked first at Mitzy, then Fitzy, Finally his eyes lingered on Tipsy and he purred. "You three are going in first."
at October 02, 2015