5. The Wabbit & the Believable Dome 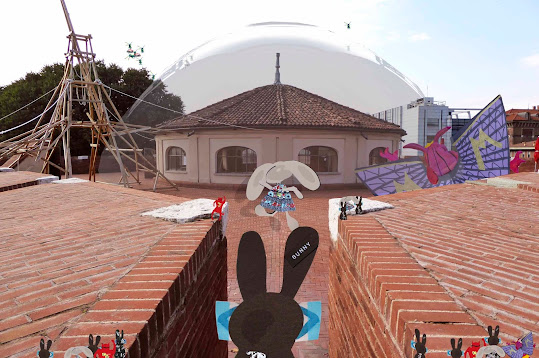 The dome looked good and the Wabbit hoped it worked as well as it looked. All around him, miniature versions of himself and his team steadily advanced, making no noise whatsoever, not even tiny scuttling. The silence was overwhelming. The Wabbit dived after Lapinette and shouted. "What do we do inside?" Lapinette loped to the shelter. "Breathing space." "What the binky are these things up to?" asked the Wabbit. Lapinette was nearly at the dome. "Each time they copy us, they use a bit of our DNA," she panted. ""Eventually there will be thousands of them - and nothing left of us." "Mother of Mercy!" screamed Moloch. "Is this the end of Moloch?" The Wabbit flicked one away but it made four copies of his paw and they all waved. "They're tap dancing on my nerves," shouted the Wabbit, "where's the door?" "It doesn't have a door," shouted Lapinette. "You have to believe you can go through it." With that she vanished and reappeared inside. Moloch beat his chest. "I am the Great Moloch!" He folded his arms and in an instant he was peering out from the safety of the dome. But the Wabbit shook his head. In these circumstances he only knew one effective way to get in. He took a long run and with a yell of "Open says me!" he viciously kicked the sphere. Inside, he picked himself up and limped across to look at his reflection. "That never fails," he nodded.
at October 23, 2015