4. The Wabbit and the Stairway Copy 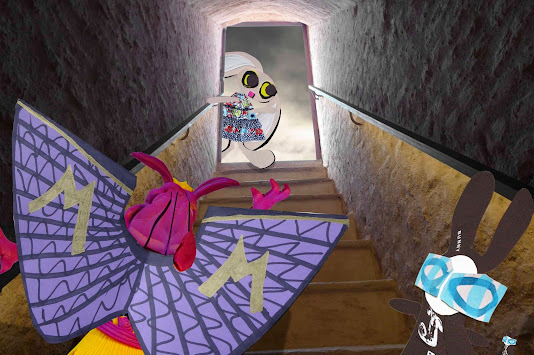 "Quickly," shouted Lapinette.  "They're coming." When they'd got the message, the Wabbit and Moloch had rushed to the Old Tower. As they panted up the steps they felt their heads clear. But although the Wabbit could scamper up anything, he hated steep. "What's going down?" he barked. "Wabbit," said Lapinette curtly. "Did you leave a model helichopper in Quantum's cab?" "On a shelf," sighed the Wabbit. "Near the filters?" asked Lapinette. The Wabbit didn't have to nod. Lapinette urged them up the stairs. "These creatures are shape shifters, they copy what they fancy." "Well I hope they don't fancy Moloch," laughed the Wabbit. Moloch's wings spread in the narrow stairway. "I am one of a kind," said Moloch, "No-one would dare." The Wabbit caught something in the corner of an eye and growled. "They can really copy living things?" Lapinette became exacerbated. "We don't know. Get a move on. I want to get this door shut." "They do stay small, don't they?" asked the Wabbit and he edged up the wall. "No-one knows," hissed Lapinette. "Hurry up!" The Wabbit glanced back, narrowed his eyes and thought that it might be too late. But it was the only idea he had. "Moloch can you make a bit of breeze with your wings?" "Direction?" smiled Moloch. "Four o'clock low," murmured the Wabbit. Moloch's wings swivelled with precision and a hurricane blasted the stairway. "Go, go, go ...!" yelled Lapinette.
at October 21, 2015