3. The Wabbit and Stardust Souvenirs 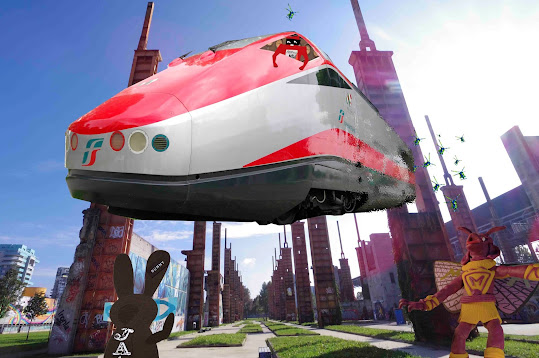 Even though he was groggy, the Wabbit met Quantum's shuttle from the Sombrero Galaxy as arranged. Quantum swam into view around about one o'clock and dropped into Pluto Park. Even though he was a famous monster, Moloch was astonished. "How much transhport have you got, Wabbit?" he snivelled.  The Wabbit did his best to grin. His fur was damp and his nose was red and his head felt like a balloon. Skratch called down from the cab. "Is here OK, Commander?" The Wabbit noticed movement and he scanned Quantum from tip to tail. The entities were small but brightly coloured and one came close to Moloch's face. "Achsplash groo," sneezed Moloch. The ground shook. "Hey Shkratch," yelled the Wabbit, "you brought pashengers." Skratch looked up and down. "I don't see anything!" At that moment an entity landed on his head, right between his ears. Skratch started to itch and his eyes watered like fountains. "Did you schtop anywhere unushual, Shkratch?" shouted the Wabbit through his nose. "We followed the dusht lane," sniffled Skratch. "and we only shtopped to clean our filters." The Wabbit shrugged wearily. "Shomething happened." Skratch thought for a second. "We saw a pair of shumthings wink near the black hole." "A wink?" questioned Moloch sagely and he paused to swipe an entity that got in hs eye. "That's allmoasht ash good as a nod."
at October 19, 2015