9. The Wabbit and the Far off Temple 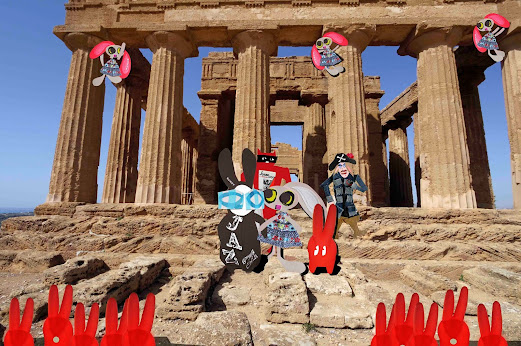 They all blinked in the fierce sun. And it was hot. Very very hot. The air smelled of drying rabbit fur, which was tangy to say the least. The thousand red rabbits hopped around ancient Greek temples and searched for grapes and figs. "We have the gift of Aphrodite," said Magic Red Rabbit. "Oh really," said the Wabbit observing steam rising from his fur. "Fertility," said Lapinette. "Was that what the Paws of Darkness wanted?" This was speculation rather than a question. "Well, it wasn't sweet, sweet loving," quipped the Wabbit. "Are they completely destroyed?" asked Skratch the Cat. "Their kind never are," said Jenny sadly and she tilted her hat in the glare of the sun. "What's that smell?" sniffed Skratch. "Just a passing wind," said the Wabbit, pointing a paw to the horizon. There wasn't a breath of wind and they gasped in the heat. "Shall we hang around here and bake?" said Lapinette. "Or shall we get a drink?" The Wabbit turned to Magic Red Rabbit. "You're supposed to be magic." "It's a courtesy title," said Red Rabbit, "but I can do tricks." Such as?" smiled the Wabbit. "I can take things out of hats," said Red Rabbit. The Wabbit looked round at Jenny who shook her head vigorously. "I never take my hat off!" she exclaimed. It was at that moment that Tipsy called from the roof of the temple. "I can see a bar!" "Is the bar far?" asked the Wabbit. "Not as far as I can see," shouted Tipsy. "So far so good," said the Wabbit. And they all laughed and laughed and laughed.
at October 09, 2015