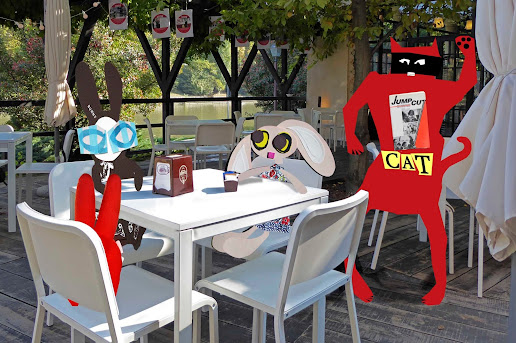 Skratch was late but everyone waited for him. "Skratch! At last," said the Wabbit. "We couldn't possibly start without you." Skratch waved a paw and laughed. "You're expecting me to ask the question!" Lapinette and Red Rabbit smirked at each other but the Wabbit kept a straight face. "The question is this. What kind of adventure were we in?" "Well, if we don't ask the question, we'll never know," said Skratch. "I know," said Red Rabbit. "It was a thriller and it was predicated upon questions of captivity and escape." "Ah," said Skratch, "the audience hoped things would be OK and feared it woudn't." "Ahem," said Lapinette, who was trying to intervene without success. "The background of paranoia places the adventure in the noir category with a clear reference to Orson Welles." The Wabbit tapped the table. "In this, symbolism was critical. The Paws of Darkness connoted an underground force with inescapable values. No one can break free." "We broke free," said Red Rabbit. There was silence for a minute. The Wabbit nodded. "But we had a moral code of mythic proportions." "And the Three Fates to help us," said Skratch, "but ... " "But what?" asked the Wabbit. Skratch sighed. "But we meet our destiny on the path we take to escape it." Lapinette thought for quite a while. "So what is our destiny?" It was the Wabbit's turn to think and then he smiled. "To keep having adventures of course!"
at October 12, 2015