2. The Wabbit & the Sneeze on Wheels 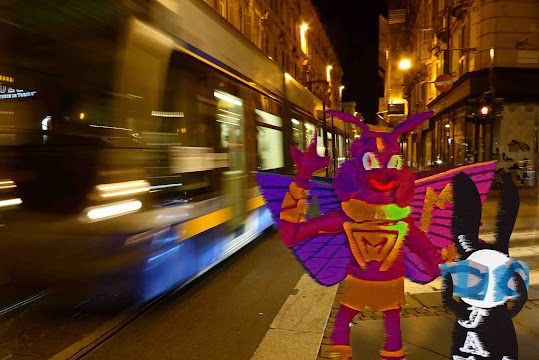 Things went from bad to worse. The Wabbit could feel every sinus channel known to rabbits. Moloch had a monster sinus and he was stuffed. "Thish is terrible," said the Wabbit. "Monstroush," snivelled Moloch. It was at this juncture they both heard the noise. "Jid you hear an Ah?" asked Moloch. "It shertainly ish an Aaaah," agreed the Wabbit. Buildings shook and tortured metal shrieked. "I didn't like the shound of dat," said Moloch and half turned. It came without warning like a thief in the night. "Itch not going to shtop," yelled the Wabbit and he jumped out the way. "I gave thish short of thing up," shouted Moloch and he followed the Wabbit. It was a tram all right but entirely composed of a cloudy scalding vapour that cleaned the street as it went. "Aaaaaahhh!" it wailed. "Aaaaaaah!" The Wabbit knew there was more to come and he said it under his breath. "Choo?" The tram flashed past and they felt its fiery breath. "Aaaaaaaah Chooooooo!" Traffic lights shattered. Shop windows blew out and scattered goods far and wide. Moloch had closed his eyes. "Ish it gone yet?" The Wabbit was somewhat muffled. "For ush ..  yesh," Moloch strained to hear because his ears had clogged up. Moloch looked as woebegone as the Wabbit felt in his fur. "Would you like a pashtille?" Moloch croaked, "I like shinnamon loshenges."
at October 16, 2015