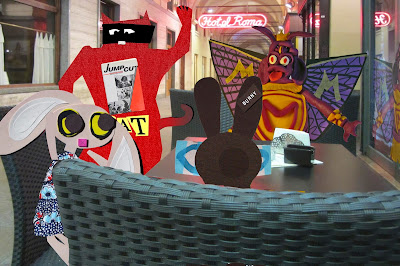 Conversation flew at the Adventure Caffè and by the time Skratch the Cat arrived, things were heated. "Question!" demanded Lapinette. She raised a paw like she'd seen in music promos. "How could Moloch be a small creature? He was never on Quantum's shuttle flights." Skratch waited silently but he knew no-one was going to ask him the question - so he answered it himself. "It was narrative non-linearity!" No one heard him so he raised his voice. "The adventure challenges the format of our stories and invites a different point of view!" Everyone looked round. "Oh hello Skratch," said the Wabbit, "I ordered you an aperitivo." Skratch looked fixedly at Moloch. "Moloch, how do you fit in to that seat?" Moloch's tummy swelled enormously. Then he laughed fit to burst and nearly did. "I discovered I could change sizes to fit into stories." His tummy rumbled and swelled again. The Wabbit waved for food and asked his own question. "How is everyone feeling after we merged?" "I don't feel different at all. Is there any beer?" said Lapinette. The Wabbit looked with horror because he knew Lapinette hated beer. "You need reprogramming," he sighed. "How does that work?" asked Lapinette. The Wabbit adopted a serious expression. "Every time you ask for beer, I give you prosecco." "Oh the pain," smiled Lapinette.
at October 28, 2015