11. The Wabbit and the Special Ticket 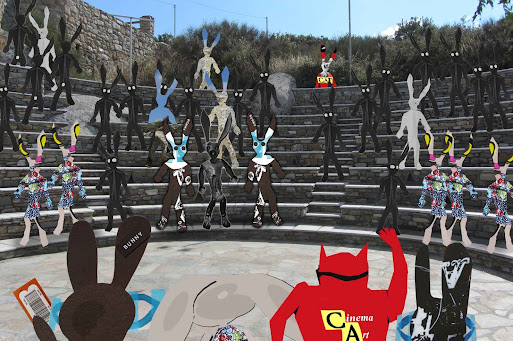 The Wabbit had information from somewhere, so the team followed him to a small arena. It was full of what looked like Murmurants - although it was hard to be certain. They seemed to glimmer in the light and change costumes - then disappear and reappear. But they had a voice. "Impostors!" shouted the crowd. "And you're not the real Wabbit. Your ears aren't right." The Wabbit hopped forward. "I might be an impostor," he yelled. "But you might just be unlucky and I'm the real deal." The crowd murmured threateningly as the Wabbit held up a card. "This is printed with explosive ink and it could blow us all to Kingdom Come." A Murmurant dressed as Lapinette nudged another. "That's got to be him, so let's get out!" A trickle of Murmurants quietly left, followed by others. "So if you're feeling lucky," continued the Wabbit, "you could hang around and see what transpires." More Murmurants left. "On the other paw," continued the Wabbit, "this could be an ordinary ticket that admits the bearer to all exhibits, functions and hospitality." The Wabbit's bared his teeth. "... in which case I'm going to raffle it. Who'll be the first to test the ticket?" More Murmurants made their way to the exits until only one figure remained. "Perhaps you, Major Spitlove?" grinned the Wabbit. The Wabbit's double agent grinned back. "Was that a trick, Commander?" The Wabbit flicked a nail lightly across the card and dropped it. As it fell, it began to glow and they all started to run.
at August 31, 2015