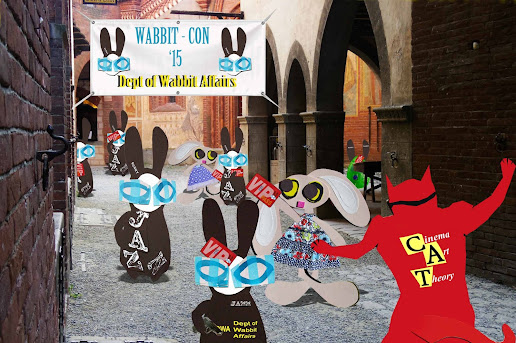 Lapinette had dragged the Wabbit for a hop to the Medieval Castle, but it was more crowded than usual. "Passes please!" said a familiar voice. "What in the Binky for?" growled the Wabbit. "You have to have a pass," said Skratch the Cat, "or you can't come in." Lapinette grinned maliciously. "It's for Wabbit-Con. Your fans are arriving from all over." The Wabbit looked all around. "No-one tells me a thing." "It's a Department PR initiative," said Lapinette. "Then I don't need a pass," said the Wabbit, "because I'm the Wabbit." Skratch scrutinised the Wabbit from ears to toe. "How do I know you're the real Wabbit? You might be a fan." "Then how do I know you're the real Skratch?" frowned the Wabbit. "Because today I'm the Cat's Pyjamas," said Skratch. The Wabbit spoke loudly. "I order you to let me in." "No pass, no admission," said Skratch, as he casually nodded a Wabbit fan through. The Wabbit hopped in fury and yelled, "I can prove I'm the Wabbit!" "OK," said Skratch, "let's have it." The Wabbit thought. "I'm the one that sent you to film classes." Skratch smiled an annoying smile. "Everyone knows that - and it's in the journalist press pack." "Oh all right," sighed the Wabbit, "I'll buy a pass." "Pre-orders only," said Skratch, "available from the Pet Shop in Corso Svizzera." The Wabbit scowled, jumped and shrugged at exactly the same time. Skratch glanced at Lapinette. "He just might be the Wabbit." Lapinette pulled an extra pass from her fur. "I'll make sure he behaves." "If you can do that," laughed Skratch. "he's not the Wabbit."
at August 12, 2015