8. The Wabbit hears himself Speak 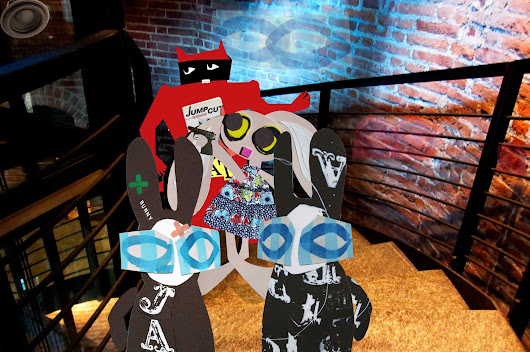 With the Agents of FAN gone, the team hacked their way into the Giant Wabbit. There was only one way to go. Ignoring the elevator at the insistence of Wabsworth, they climbed the curious stairs. The Wabbit sniffed an exotic smell. "This isn't brick is it?" "It feels like Aerogel," said Wabsworth. "Liquid smoke!" said Lapinette. "I feel something else," said the Wabbit. "Like someone was staring into my back." The loudspeaker on the wall barked with the Wabbit's own voice. "What am I bringing for luck?" it crackled. They had only taken a few hops more when the speaker barked and again the Wabbit's voice sang out. "No amount of careful planning can beat good luck." This was beginning to creep the Wabbit out. His head throbbed, his bones ached and his fur itched but there was no respite. "Luck," said his voice, "is when preparation meets opportunity." "Oh, kill it!" snapped the Wabbit. There were deafening blasts and ricochets as Lapinette's automatic spat several times. Now the Wabbit's loudspeaker voice was as slow as pond water - and each word seemed to be an effort. "That was cha cha chance. Do you have any luck luck luck left over?" The loudspeaker clattered into shards and silence replaced the ricochets. Low, ominous sounds swirled around the stairway walls. "Are these whispers?" asked Lapinette. "No," said the Wabbit. "That was a murmuration ..."
at August 24, 2015