9. The Wabbit and Value of Vultures. 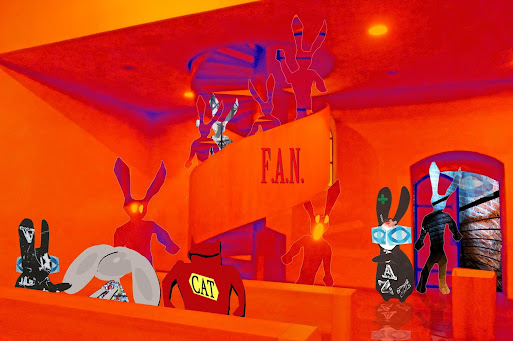 It was a surprise, but the team went into action. "I'm a fan and I have a vulture!" said the Wabbit. Lapinette thought fast and kicked Wabsworth in the foot. "I also have a vulture," he shouted. The creatures froze. Skratch looked at the Wabbit. "Where did you get your vulture?" The Wabbit smirked. "I mailed many tokens for it." Lapinette smiled sweetly. "I get entrance to the VIP tent and if I show my vulture, I can shake the paw of our hero, the Wabbit." "You can't come in here!" yelled a creature. The Wabbit stamped his foot. "My vulture says admit the bearer anywhere at any time." Despite the pain in his ankle, Wabsworth gasped in awe and he turned to stare at the creatures. "Show us your vultures!" "We are the Murmurants," said a creature, "and Murmurants have no vultures." "Then you shouldn't be here at all," said the Wabbit. Skratch spoke with an angry growl. "You don't look like fans, so leave fan business to us." The Murmurants set up a thoughtful murmuration that agreed with itself and said, "Maybe you have some spare vultures?" "I might," said the Wabbit. "But not here." Silence fell but the Wabbit broke it. "You can get them in the kiosk in Via Nizza." The Murmurants shuffled out but as they moved down the stairway, they inexplicably vanished against the brickwork. "That was too easy," said the Wabbit, "they bought the whole thing." Wabsworth shook his head. "No they didn't." ...
at August 26, 2015