7. The Wabbit and the Agents of FAN 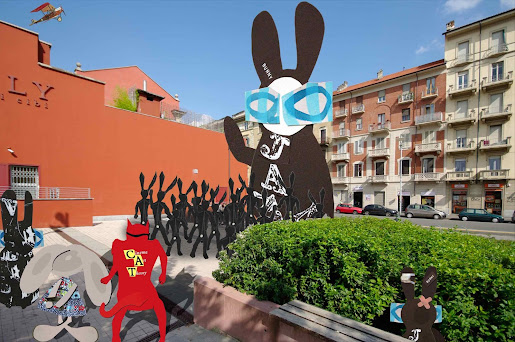 The Wabbit escaped from hospital with stolen medication and bandages. The knock on his head left with him some kind of sixth sense, so it wasn't hard to find the team. But the team had already spotted unusual goings-on. A giant Wabbit towered above the buildings, surrounded by chanting fans who seemed familiar, but weren't what they seemed. "I am the authentic Wabbit and no other Wabbit precedes me," boomed the giant Wabbit. The fans were delirious. "Blessed be the Wabbit! Blessed be!" The giant Wabbit lifted a paw. "I am the Wabbit of the past, the future and a bit later on." Lapinette dug Skratch gently in the ribs and whispered. "That thing does sound like the Wabbit." "He put on weight," quipped Skratch, "it's the hospital food." Lapinette sniffed and in her mind she could see her Wabbit. "You're supposed to be resting," she thought. The Wabbit heard it. "I was bored," he murmured. "That's no excuse," thought Lapinette. The Wabbit tried to control his enhanced power and projected it at the giant Wabbit. Its paw flailed wildly and a booming staccato echoed from the walls. "Wab wab wab wabbit." "Wab wab wab wabbit," yelled the fans. "Bitty bit bit bit bitwab," slurred the giant Wabbit. "Bitwab"" roared the throng. "Now seek out sustaining sustenance," boomed the giant Wabbit, "but keep one tenth for The Wabbit." As the fans departed, Skratch looked bemused. "He's very fair for a giant."
at August 21, 2015