6. The Search for the Perpetrator 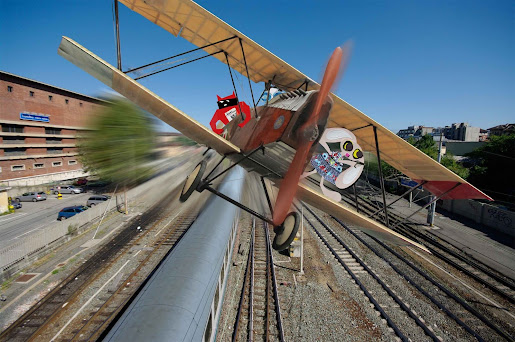 There was no shortage of volunteers to look for the culprit and Lapinette balanced on Susan's wing as she sped to Lingotto. "How's the Wabbit?" asked Skratch the Cat. "Complaining," shouted Lapinette. Wabsworth grimaced. "When I get the perpetrator, I'll rip his stem from his stern." "We haven't got one yet," yelled Lapinette. "I want ideas!" Susan's engine whined, chugged and rattled as she raced close above the tracks. Skratch gripped the fuselage and looked for clues. "What about enemies?" Wabsworth shook his head. "The city is full of Wabbit fans dressed as enemies." Lapinette shouted through the wind. "What about the Fanbots?" "They're citizens," shrugged Wabsworth. "I'm guessing a malignant voyeur." The wind tore at Skratch's fur and he screamed to make himself heard. "Anyone missing? Someone we've forgotten." A train shrieked past. The noise was unbearable but Skratch's eyes were keen and he jerked round. "I think I saw something." Lapinette grabbed a strut and turned. "What kind of something?" Skratch hissed and arched his back like a wildcat. "Something isn't right. Wabsworth. Can you land Susan here?" "I can very well land myself," snorted Susan and she flew vertically upwards, twisted in the air and dived. Everyone except Wabsworth gasped in the g-forces. "Bank angle, bank angle," shouted Susan, "stall, stall, stall!" "Is she always like this?" gulped Skratch. "Invariably," sighed Wabsworth.
at August 19, 2015