2. The Wabbit & the Pure Hop FanBots 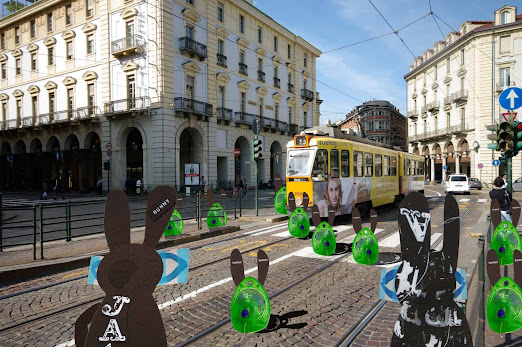 The Wabbit and Wabsworth headed for the tram, but when it came to a halt, green FanBots flooded out. The Wabbit sighed. "You know everything about this, Wabsworth, don't you?" "I'm an android with a mammoth memory," said Wabsworth. "Then who?" asked the Wabbit tersely. Wabsworth paused and a smile flickered across his face. "These are Pure Hop FanBots." The Wabbit shook his head and murmured, "Why?" Wabsworth kept an eye on the FanBots' approach and elaborated. "The FanBots of the Pure Hop Tendency do not approve of the status quo." "Well, Qui, Quo, Qua," flounced the Wabbit. Wabsworth paid no attention and continued. "The Pure Hoppers are coming to WabbitCon to protest." The Wabbit's eyes rose so high they reached his ears. "They do not consider you a personality, Commander," said Wabsworth. "You are the Liberator who will lead them to the Promised Hay." "I will not," moaned the Wabbit, "I'm busy." "Excuse me," said a Pure Hopper, "that is a good costume and you wear it well." The Wabbit clenched his paws and tried very hard to be civil. "Thank you," he nodded. The FanBot looked up. "But the lettering isn't quite right." Wabsworth detected the start of a low growl, so he interrupted. "It's nearly Ferragosto Holiday and all the costumiers are on vacation." The FanBot whirred his fan. "Where can we find the Great Leader?" "He took a small vacation," snapped the Wabbit.
[In Italy, Qui, Quo and Qua are Donald Duck's nephews, Huey, Dewey and Louie.]
at August 10, 2015