12. Tipsy and the Zui Quan Approach 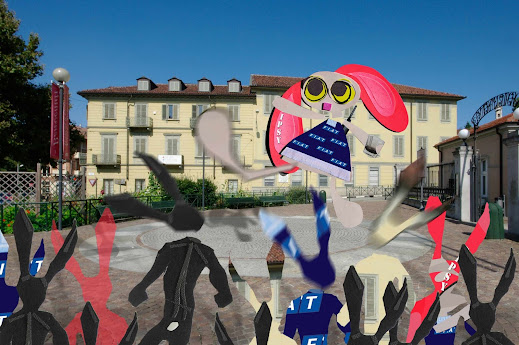 Round the corner, Tipsy was waiting. When her radio made the faintest crackle, she took a sip from her glass and lurched. "Hello boys." She staggered to the right, then the left, then stood where she'd been before. Her eyes swirled as she swayed and for a moment she seemed to trip and fall - but she was still on her feet. Her paw clutched her glass tightly and she held it up. "There's a lovely little caffè across the street," she murmured. "Won't someone buy me an ickle dwink?" The Murmurants shifted uneasily. "Go round her," said one. Another tried to move past but she staggered in his path. Every time they made a move, Tipsy was there. A chorus of annoyance echoed round the concourse as the Murmurants shared a secret signal and started to draw on the colours and shapes of the scene. Yet the more they tried to alter themselves, the more Tipsy staggered. No matter what they did, they just couldn't get a fix on the drunken rabbit and the strain was showing. So they gathered together for strength and tried harder. It all happened as they were mid way into a solid transition. Tipsy's jump was sudden. A giant foot slammed forward and a neck cracked like rotten wood. Her leg swept round in a ragged arc. Heads bounced along the concourse and rolled to a stop. It was over so quickly that Tipsy shrugged and hopped forward across the street. "I'll buy my own drink," she grunted.

[Zui quan (Chinese: 醉拳) is Drunken Kung Fu. It's the general name for all styles of Chinese martial arts that imitate a drunkard.]
at September 02, 2015