The Wabbit is transported to a Christmas destination 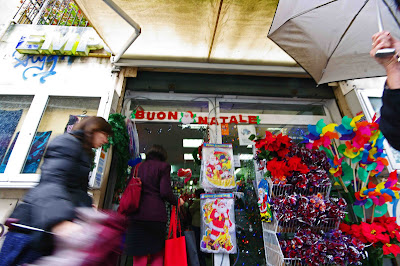 The Wabbit had been staring at the Christmas wreath and wondering about his travel arrangements. Then suddenly he found himself in a strange street outside a strange shop. For a second, the Wabbit was astonished. But then he understood. As if by magic - and perhaps it was magic - the Giantess had transported him without delay. He searched in his fur for his passport (which he didn't really need) and his emergency coin (which he did really need). They were both there! He was already on holiday. But where was the Wabbit? "I must be in Italy", thought the Wabbit, "because that sign means Happy Christmas in Italian." And as soon as he thought that thought, he felt the strangest sensation in his ears. The Wabbit found that he could understand everything that people were saying. The Wabbit was more than delighted, he was ecstatic! "Thank you Giantess", murmured the Wabbit. "But what shall I do now?" Of course there was no answer, because the Wabbit knew that what he should do on his very own holiday was entirely up to the Wabbit. "Que sera, sera", thought the Wabbit - and then he cartwheeled furiously down the road with reckless speed. Not one single person saw him do that, which was just as well for the Wabbit.