The Wabbit awaits news of his Surprise Holiday Destination 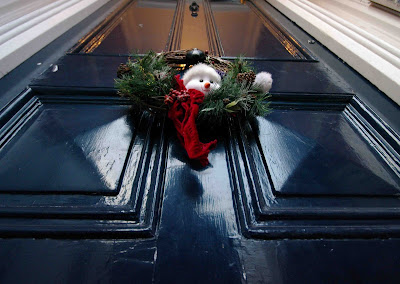 Full of excitement, the Wabbit arrived home to pursue his preparations. The children had decorated the door with a welcoming Christmas wreath and the Wabbit thought it looked quite nice. The Wabbit knew perfectly well that not every wabbit had a Christmas wreath on the door. The Christmas spirit had definitely seized the Wabbit. Now that he had organised everything, he was free to do what he wanted. No missions, no assignations or any duties of any kind were in his way. The Wabbit hoped that his surprise holiday destination would be revealed in the Christmas post. Perhaps it was behind the door at this very minute! Had the postman been? Would there be a registered delivery? Would the Wabbit have to sign for things? What if it had to be picked up? "Oh silly Wabbit, stop worrying." thought the Wabbit. "You're officially on holiday!" And the Wabbit smiled the biggest smile he had ever smiled and hopped into the house.
at December 20, 2010