The Wabbit finds traces of incomers in his Neighbourhood 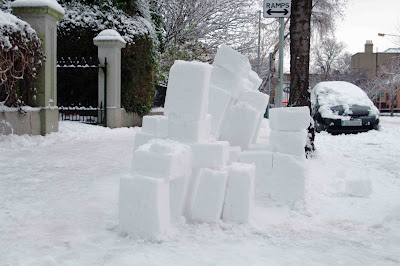 Aided by he warmth of Lagomorph Lager, the Wabbit easily made his way home. But when he rounded a corner into a familiar street he was stopped dead in his tracks by a strange sight. Or was it? "Eskimos!" gasped the Wabbit and he hunched down for a better look. The Wabbit was aware that not everyone liked the term Eskimo, but he knew no other. Anyway, the Wabbit was completely unaware of any Eskimos in the area but he acknowledged that there could easily be a small community. People travelled around, reasoned the Wabbit. Many people from different lands had made the Wabbit's neighbourhood more diverse and interesting. So had climate change made the presence of Eskimos here a likelihood? The Wabbit hoped it had, despite his cold paws. "I will return if the weather holds. Perhaps they might need help to build the igloo." And the Wabbit, resolved that day to be a more helpful wabbit in as many ways as a wabbit could.
at December 06, 2010