The Wabbit in the Piazza Navona 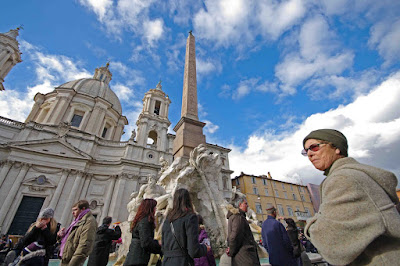 “Oh it’s good to be out and about,” thought the Wabbit. “A change is as good as a rest.” Then the Wabbit decided it was better to stop thinking. He was always thinking. Sometimes he thought so long and so hard that he missed things in front of his nose. So he searched in his fur for the small guide book, thoughtfully provided by his benefactor, the Giantess. “Aha! This is Piazza Navona,” observed the Wabbit. “... and it looks very nice indeed.” The Wabbit looked at the tall obelisk and he could see strange writing, carved on the side. The guide book said that these were hieroglyphics, a very old language made out of signs and pictures. So of course, the Wabbit looked up and down the obelisk for a picture of a wabbit. He could see birds, cats and many animals but no sign of a wabbit. So the Wabbit went around the other side. And there it was – carved into the stone was a wabbit with very long ears. It was uncanny. The picture looked just like the Wabbit himself. “I’m older than I think!” thought the Wabbit and chuckled his way down the road.