The Wabbit is received with his very own Song 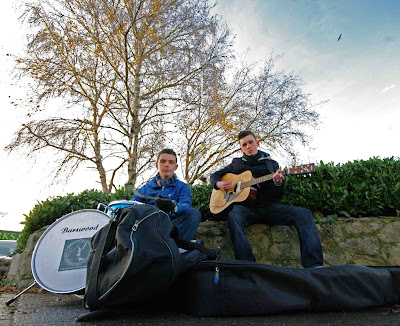 No sooner had the Wabbit left the Christmas display than he heard the sound of music being played rather well. So he stopped to have a look and a listen. And as he tapped a paw gently on the tarmac, he heard the strangest thing. He overheard one of the musicians say "Isn't that the Wabbit?" And the other one replied "Not the Wabbit! Surely never. We had better humour him, by playing him a song." And then they burst out in tune.

Rock on Wabbit/He's a Wabbit on a mission /He don't need no permission/to Rock and Roll
Right on Wabbit/His fur's in good condition/so we'll follow the Wabbit/
and we'll all wock and woll!

The Wabbit was very, very flattered - but at the same time he was a little embarrassed. So he clapped his paws together lightly then felt in his fur for his emergency coin, carefully placing it on the guitar case. And then he hopped quickly across the road, in case anybody else could see the Wabbit and sing more songs about him.
at December 16, 2010