The Wabbit considers the duties of Christmas 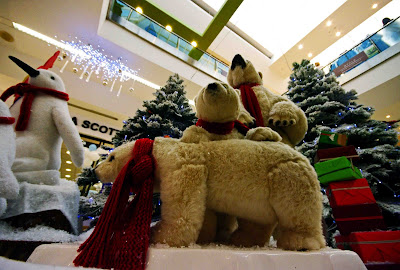 The Wabbit crept between the children's feet and looked carefully at the Christmas display. He thought it was ... quite nice. Even although wabbits, as always, were excluded, he did think the bears were rather well-represented. But Arctic wabbits were so very, very lovely - and even though the Wabbit thought and thought, he could not come up with an explanation as to why these beautiful creatures were never considered. Then the Wabbit looked at the presents under the tree and wondered what was in the boxes. Christmas was coming and the Wabbit felt unprepared. What about the cards? What about the gifts? And most worrisome of all, what about all the Wabbit's relations? That made the Wabbit tremble slightly. Because wabbits have so many relations, it could make the festive season seem daunting. "Don't worry Wabbit" thought the Wabbit. "I wish them all well - and that's more than enough!" Satisfied, the Wabbit hopped in a sprightly way, bidding the bears a cheery goodbye.
at December 14, 2010