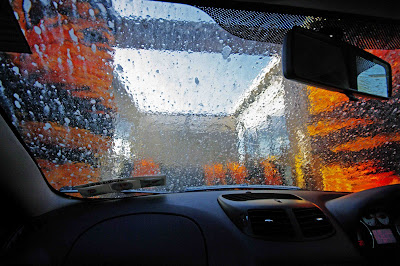 No sooner had the Wabbit awakened that he was whisked off to do Christmas shopping. It was something the Wabbit liked to put off, although he enjoyed it when it happened. The Wabbit knew that he had to be forcibly encouraged. It was very warm in the car and sometimes it was too hot, since the Wabbit had substantial amounts of his own fur. Just as he nudged the climate control switch with his nose, the Wabbit was suddenly surrounded by giant brushes, which whirled and whooshed and whirled again. "My goodness me, whatever next!" thought the Wabbit. The Wabbit thought it would be very peculiar indeed of there was a giant Wabbit Wash where wabbits of all kinds queued to be cleaned. There might even be a premium grooming option which the Wabbit thought of as the Big Golden Wabbit Wash. The Wabbit murmured to himself about the possible options. "Six Wabbit Washes, get one free!" The Wabbit decided he quite liked Christmas shopping and chortled quietly in the way that wabbits sometimes do.
at December 12, 2010