5. The Wabbit introduces an Old Friend. 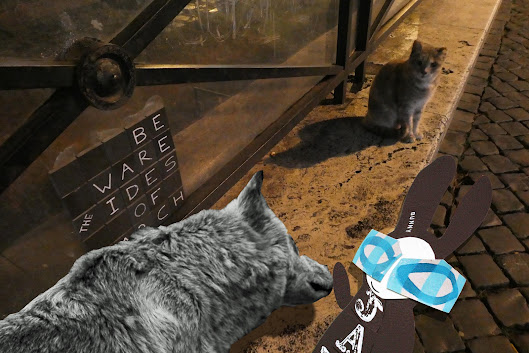 The Wabbit and Rommy the Wolf ambled to the Largo di Torre Argentina. The Wabbit waved a paw. "And this is .." "I am Antiquicat," interrupted a cat. "He's my oldest friend in Rome," said the Wabbit. Rommy stared, then exclaimed. "I imagined you rather more orange." The cat meaowed. "I've had many lives and am quite ancient. I am therefore obliged to change my fur from time to time." The Wabbit grinned. "It's a Buddhist thing." Rommy looked round and saw the sign. "What's with the Ides of March. It's not March, it's April. So can we stop bewaring?" Antiquicat purred. "I do like your sense of humour. Are you an acquaintance of the Wabbit?" They settled down for a chat. "The Wabbit is introducing me to his friends," said Rommy. "I didn't know he had any," replied Antiquicat. He meaowed and screeched and held his sides. The Wabbit smiled amiably. Antiquicat continued although he could hardly speak for laughing, "The Wabbit comes to me for advice when he's run out of ideas." Rommy nodded. "He's a character all right." They chatted until it got late. Then talk turned to serious matters. "What about the Agents of Rabit?" asked Antiquicat, "I hear they have a new leader." The Wabbit lowered his voice. "Do tell." Antiquicat's voice was merely a squeak. "They call him ... Major Spitlove." The Wabbit could hardly be heard, his voice was so low. "He's one of ours." Rommy growled softly. "Wabbit, you have a double agent in the enemy camp?" The Wabbit nodded. Rommy snarled. "I like the sound of this. Just like the old days." The Wabbit tugged Rommy's fur, "Wanna join us?" Rommy suddenly rolled back and forward on the sidewalk, paws in the air. "We'll have a howl of a time!"
at April 07, 2022