10. The Wabbit and the Surprise Action 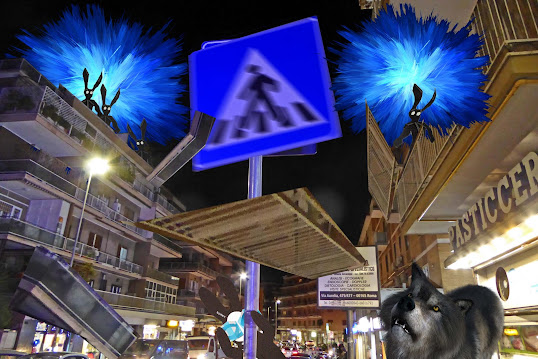 The Wabbit had miscalculated. The opposition - or both oppositions - were much better organised than he'd thought. They had commandeered the tops of buildings and were throwing balconies down in the street. Instead of watching them demolish each other he found himself dodging brickwork. He clung onto a road sign. Rommy was incensed. "Do you know it's my birthday today?" He growled and his fur spiked up. His eyes flared in a colour the Wabbit had never seen. "Who do they think I am?" said Rommy. A balcony whizzed past his nose. "Wile E. Coyote?" suggested the Wabbit. He ducked and dodged and complained all at the same time. "I suggest we take cover and let these rompicoglioni run out of steam," said Rommy. "I know where," said the Wabbit, "follow me." He hopped to other side of the road and down an alleyway. Passers-by dodged the hail of brickwork but when they saw Rommy they fled as their legs could carry them. The Wabbit and Rommy found themselves in a place that sold washing machines. "Best to wait here," whispered the Wabbit. "Do we have to buy anything," asked Rommy. "Not unless you're still in the market for consumer durables," grinned the Wabbit. "They play rough these Agents," observed Rommy. "Not as rough as us," retorted the Wabbit. "They got no respect," added Rommy. "So we have to teach them a lesson they won't forget," replied the Wabbit. He thought for a minute. "I usually kaboom them." Rommy didn't like the sound of that. "We should rend them limb from limb." The Wabbit nodded. "In what location should we rend?"
at April 21, 2022