4. The Wabbit and the Wolf's Acquisition 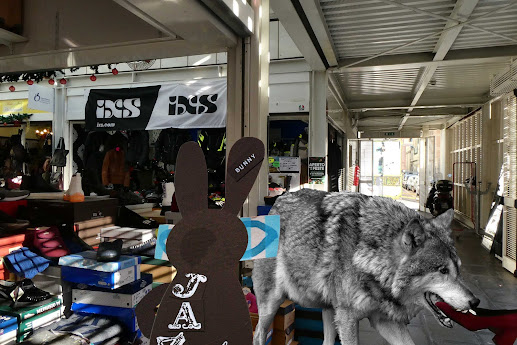 The Wabbit and Rommy the Wolf were fed up with consumer durables, so they took a walk through the New Testaccio Market. They glanced at this, and they glanced at that. As usual it was predominantly ladies clothes. Rommy didn't seem to care and suddenly he lunged, snatched a shoe and casually padded off with it. "They see it, but they don't believe it," he growled. The Wabbit was officially appalled. "You can't just take things," he exclaimed. "I can," said Rommy, "I'm a Roman God." The Wabbit looked askance. "I think you'll find things have changed around here. Anyway, what do you want with ladies shoes?" "Spoils of war," said Rommy. The Wabbit thought of Wabsworth and quietly slipped a few notes on the market stall. They strolled on. "Are you going to wear it?" asked the Wabbit. "I'd look a right charlie wearing it," said Rommy, "I'm going to keep it in my collection of seized footwear." The Wabbit grinned. "Wouldn't you prefer a sausage?" He watched for Rommy's reaction. "What kind of sausage?" asked Rommy. "Vegetarian sausage?" suggested the Wabbit. Rommy turned up his nose. "I'd prefer a nice steak," he said. "Did you know Testaccio used to be the livestock market?" asked the Wabbit. "I know everything about Rome," said Rommy. "Then I suppose you know it's been turned into an art exhibit?" The Wabbit waited because he knew what was coming. "Hideous, hideous, hideous," said Rommy, "First year art students with too much money." The Wabbit thought about it. "The kind that did your mural?" Rommy snarled. "A bunch of baristas!" The Wabbit laughed. "Let's get a coffee."