11. The Wabbit and the Deserted Shop 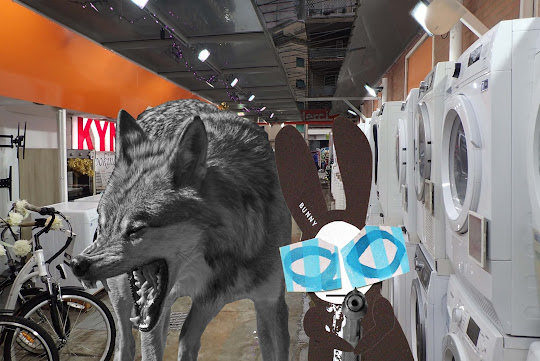 The Wabbit and Rommy the Wolf made their way into the shop. Everyone had fled, but they made sure the shop was empty. "Do you have a plan?" asked the Wabbit. "Do you? asked Rommy. The Wabbit shrugged. So did Rommy. A wolf's shrug looked impressive. Rommy looked around. "Do these things work?" he asked. "I think so," said the Wabbit. Rommy looked intrigued. "Maybe we could lure them in. What do they like?" The Wabbit thought for a minute. "Ginger biscuits," he said. Rommy wrinkled his nose. "Really?" "Everyone does," said the Wabbit. "Do they sell them here?" asked Rommy. The Wabbit shook his head. "I'll nip out for some," said Rommy and he vanished. The Wabbit watched him go. There was a coop nearby and that's where he thought he'd get biscuits. He tucked his gun back in his fur and glanced about. There were electrical things of all descriptions. He examined curling tongs. "Useful." he said to himself. One said, "Best for short hair." He tucked that in his fur. Rommy returned bearing biscuits of varying descriptions. "That was quick," said the Wabbit. "Nobody at the till," said Rommy. They opened the doors of the washing machines and placed the biscuits deep inside. "Now we have to call them," suggested Rommy. He placed a biscuit on a stove and turned it on. The smell of hot biscuits wafted through the air. "Like this", said Rommy. He shouted. "We're having hot buttered biscuits!" The Wabbit joined in. "We're having hot buttered biscuits," he called. He heard the scurrying of feet. "They're coming," said Rommy. "Get ready to shove the devils in ..." "And then?" asked the Wabbit. "We give them a good clean," said Rommy. "And neat curls," nodded the Wabbit.