6. The Wabbit and Terni's Reunion 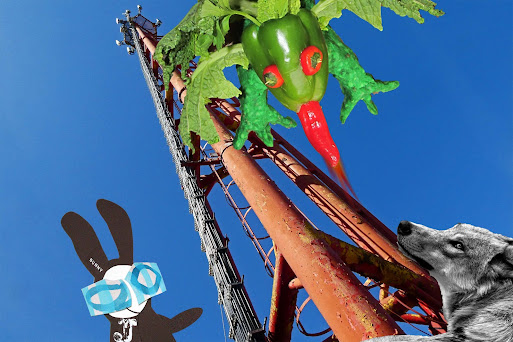 The Wabbit and Rommy the Wolf wandered out to the Wabbit's favourite mast. The mast was sadly in need of a repaint but the Wabbit liked it. There he often met Terni the Food dragon - and true to form Terni came swooping down. Flame billowed from his pepper nose as he let out a blood curling yell. The Wabbit grinned with all of his 28 teeth. "Rommy, meet Terni the Food Dragon." Rommy's eyes opened wide with delight. "Terni, is it really you?" Terni hovered. "Rommy - I thought you were dead." Rommy blinked several times. "I thought the same of you. Didn't the clergy get you?" Terni somersaulted backwards. "I was much too clever for them. Now they eat out of my claw." Rommy muttered. "Clerical fools." The Wabbit was astonished. "When you two have quite finished, we have work to do." Rommy bathed in the heat from Terni's nose, turning round to get an even tan. "The Wabbit tells me he's having a spot of bother with his enemies." "Oh, is it to do with Spitlove?" roared Terni. "The Wabbit turned him, but I heard dragons' whispers indicating a change of leadership." Rommy matched Terni's roar. "Let's plot. I love plotting. But my troops are all gone." The Wabbit thought this was a good time to summon his own troops. "Why don't you two sort it out - since you're so pally. I'll round up my forces and meet you at Testaccio later." Terni and Rommy were lost in conversation and the Wabbit took it as read. So he quietly padded off for the bus. "Rommy hasn't met Tipsy," he murmured.
at April 11, 2022