9. The Wabbit sets Rommy on the City 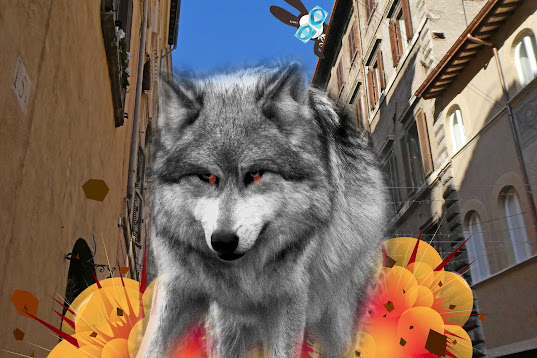 Acting as a decoy, Rommy the Wolf set off into the city. It was all his idea and the Wabbit was rather sceptical. The Agents were terrified of Rommy and so it seemed unlikely they'd be drawn out. But Rommy insisted. His paws struck fire from the cobbles and his eyes glared a dull, threatening red. "I'm a God," he said. "They won't be able to resist me." Rommy was at his most frightening and the Wabbit felt the heat in his fur. Rommy didn't move quickly. His pace was leisurely. His head searched from side to side. He glared into shop doorways. "Come out you Agents. Dare to fight the Mighty Rommy! Come out and be seen." No-one stirred. Nothing moved. The Wabbit followed Rommy by hopping along the rooftops. Together they made their way through Rome. It was as deserted as the Wabbit had ever seen it. Rommy growled softly. "I'll mince your chops, you verminous crew." But it was all to no avail. So Rommy began to inflate. His paws were twice their normal size. His fur shone like a thousand diamonds. When he bared his teeth, the very buildings flinched back. Then the Wabbit saw something. It was the Agents. Their horrid ears poked out from the eaves of far-off buildings. They were grouping for an attack, but it wasn't clear at what the assault was aimed. "Interesting," murmured the Wabbit. He called softly to Rommy and made a circling motion with his paw. Rommy nodded and disappeared round the back of some old houses. Now the Wabbit could see the Agents. They were comprised of two hostile groups - hostile to each other. The Wabbit grinned. "Major Spitlove!" He called to Rommy. "Back off Rommy, our enemies are making mistakes."
[Wolf by Steve Felberg at Pixabay]
at April 19, 2022