8. The Wabbit and the Outraged Wolf 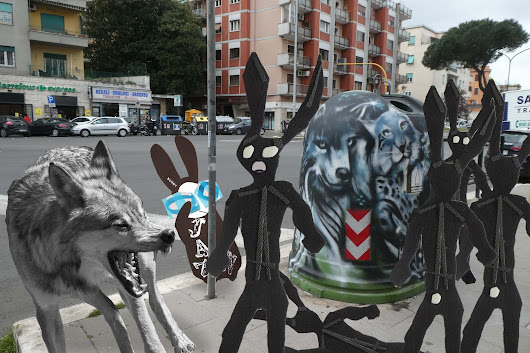 The Wabbit rounded the corner to find his plan had gone slightly askew. A group of Agents had assembled at a refuse dumpster and were making fun of the picture. Rommy advanced on them with venom. He roared and they scattered like billiard balls. One fainted dead away. Another was transfixed. Rommy's hackles rose and his mouth revealed devilish sharp teeth. The Wabbit waved a paw. "Rommy, this isn't in the plan!" Rommy roared again. "What plan? These foul creatures were abusing a wolf image. They must pay." The Agents of Rabit managed to dust themselves off and run away. "I'm pleased to see that the mighty cult of the wolf continues," said Rommy. The Wabbit sighed. "That's a garbage dumpster Rommy. The painting is part of an anti-graffiti, policy." Rommy grimaced. "It's the principle of the thing. Wolves will not be treated like chaff in the wind." The Wabbit knew Rommy was mixing his metaphors but felt it politic not to tell him. "I met with Major Spitlove at Testaccio - where you're supposed to be." "I was roaming," said Rommy. "Well good for you," said the Wabbit. "Spitlove is sowing dissension in the ranks. We must be ready to take advantage." "I think we already did," growled Rommy. They watched the Agents vanish into the city. The Wabbit felt that this might be in their favour after all - and said so. Rommy nodded. "They weren't expecting a God of Rome." The Wabbit grinned. "Then they're very happy or deeply unhappy!" "I shall cause them to come to my temple," said Rommy. "I didn't know you had one," joked the Wabbit.