7. The Wabbit and Major Spitlove 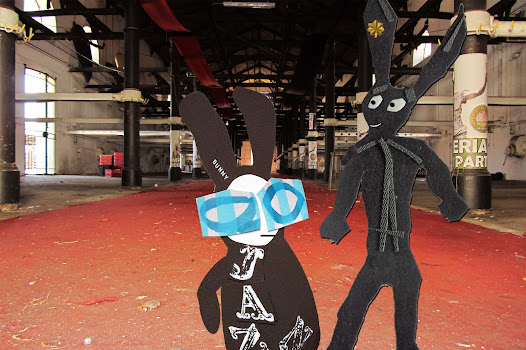 The Wabbit stood in an old cowshed in Testaccio and waited patiently. When Major Spitlove emerged from the shadows. He had a broad smile on his face, which was unusual to say the least. The Wabbit scowled. It would never do to smile at Spitlove and he was anxious to keep up appearances. Spitlove's smile became broader. "All going according to plan, Commander." The Wabbit's frown was as frowny as could be. "They buy it then." Spitlove nodded. "The whole body of Agents are thrilled. I won paws down. I am now leader of the New Model Rabit Faction - and Commander in Chief of the whole shebang." The Wabbit smiled a faint smile and revealed most of his 28 teeth. "That will keep them busy for a while." Spitlove had been a double agent for as long as anyone could recall. But boundaries were boundaries and the Wabbit wasn't expecting familiarity. "That joke Skratch suggested went down well," said Spitlove. The Wabbit's ears swung back and formed a question mark. "Why did the secret agent cross the road?" asked Spitlove. "He wasn't on your side," shrugged the Wabbit with a sigh. "I'm very popular with the rank and file," said Spitlove. "I'll bet," said the Wabbit. They strolled to the gate. "How's that wolf?" asked Spitlove. "Settling in," replied the Wabbit. "A formidable ally," said Spitlove. The Wabbit nodded in agreement. "Lie low for now, and wait for my command." Major Spitlove leaned back. "Remind me. What is your command?" "I haven't thought of it yet," said the Wabbit.