8. The Wabbit and the Hidden Depths 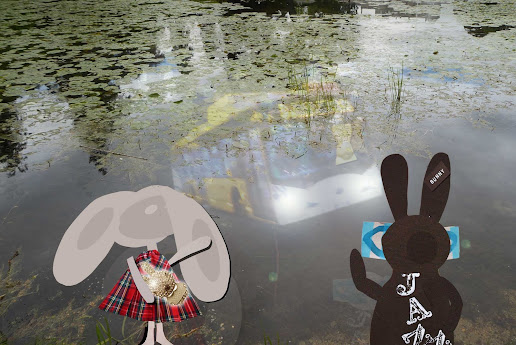 Lapinette grabbed the object. The Wabbit gazed at it. "The ancient bejeweled rabbit of Wablantis!" Lapinette looked puzzled. "But there's only one and we already have it." The Wabbit shook his head. "The old legend said that two were made but one was lost." Lapinette laughed. "Well, now we have them both." She tucked the bejeweled rabbit into the back of her frock. A sudden gushing noise took their attention. It seemed to come from beneath the pond. The water lit up. "Illuminations?" grinned the Wabbit. Gushing turned to a roar. Headlights carved a path through the depths. A CGT Turin bus rose to the surface like submarine."Is that our bus?" asked Lapinette?  "I'd say that was definitely ours," said the Wabbit. Lapinette squealed and hopped up and down. "Are our tickets still valid?" The Wabbit laughed. "I think we can work something out." He pointed to the front of the bus. The chocolate rabbit was driving and he waved and changed gears and revved the engine. The Wabbit hailed the bus with a smile. "How do we get on?" asked Lapinette. The bus floated higher and higher until it floated over the surface. The doors hissed open. "After you," said the Wabbit. He lifted Lapinette onto the platform and then jumped on himself. The doors hissed shut. There was a roar and the bus vanished. Diesel fumes hung briefly in the air and died away. Water lilies shimmered and closed over the pond. The bus and its passengers were gone.
at April 17, 2019