7. The Wabbit and the Big Search 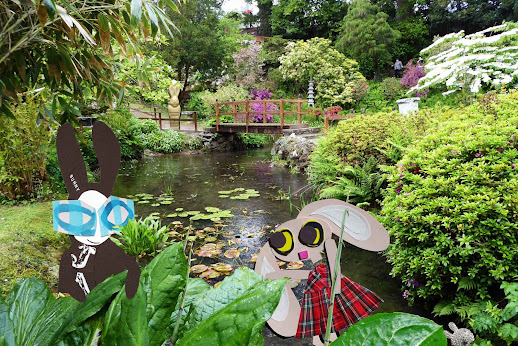 The Wabbit and Lapinette followed a path through the woods until they came to a delightful pond with a little bridge. They stood on the bridge for a while and looked at the foliage. The Wabbit grinned. "Whatever it is, I suppose this is the place we'll find it." Lapinette gazed at the pond, which she found quite delightful. "Find what?" The Wabbit jumped into the pond and started to wade. "We won't know until we find it." Lapinette followed suit. She tried to keep her frock dry without success because the Wabbit was turning over every frond and kicking up a stir. He turned over stones. He grasped stalks and shook them. Lapinette did the same and together they worked away for some time. The Wabbit was well aware that the chocolate rabbit had followed them, because he could feel a stare at the back of his head, but he didn't look back. He shrugged. "We're supposed to find whatever it is and that chocolate rabbit will wait here until we do." The day wore on but they hadn't found much. Lapinette complained. "A slug crawled up my frock." "I hope it didn't get far," laughed the Wabbit. Lapinette shrieked with laughter and sprayed the Wabbit with pond water. That's was the moment she noticed something glinting. It was half hidden in the water and covered in sodden leaves. Her cry caused every bird in the woods to flutter upwards. "I found it!"
at April 15, 2019