2. The Wabbit and the Carrot Incursion 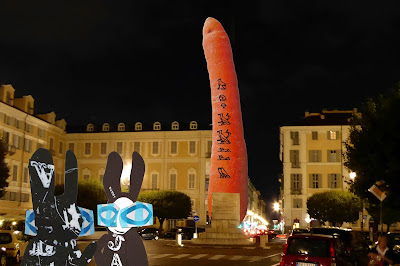 The Wabbit wasn't often surprised, but this was an exception. "My gast is flabbered," he grinned. Wabsworth wasn't so amused. "They've been appearing all over the city, carrot monuments, carrot obelisks, carrot signs, carrots, carrots, carrots." Is this doing any harm?" asked the Wabbit. "Some of them glow in the dark," said Wabsworth. "One is mildly radioactive and another sings songs." The Wabbit doubled up with laughter. "What about?" "Carrots," replied Wabsworth. The Wabbit was helpless with mirth. "People are complaining, said Wabsworth. The Wabbit blinked. "Everything smells of carrots." The Wabbit shrugged. Wabsworth continued. "Someone tried to cut a slice for a soffritto and the carrot hit him on the head." The Wabbit drew a breath. "It'll be the celery next." Wabsworth was aghast. "Not on my watch," he yelled. The Wabbit looked round at the carrot obelisk and he studied the hieroglyphs for some time. His head moved up and down. "Does the inscription mean to say carrot? Because it's not spelled correctly." Wabsworth stepped back. "I'm an android not a history teacher." The Wabbit looked again and his ears swayed as he listened. "Did it say something?" "Mha Kheru!" The voice repeated. Wabsworth whirred as he ran an ancient Egyptian algorithm. "It says it's justified." "And ancient?" grinned the Wabbit.
at April 26, 2019