4. The Wabbit and the Rapid Descent 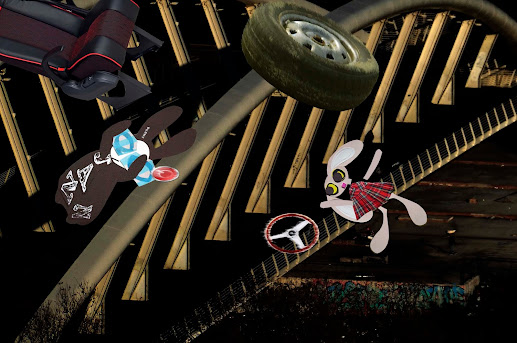 The bus fell apart. It was a sudden as it was unexpected. The Wabbit and Lapinette had secured partial control and the daring leap over the canal tunnel had been successful. They turned to congratulate each other but in the next moment they found themselves in the open, spiraling down towards a bridge they'd never seen before. It looked like a fancy clothes hanger and it was coming up fast. Bits of the bus flew though the air. A seat narrowly missed the Wabbit. A seat belt buckle grazed his nose. Lapinette automatically grasped for a flying steering wheel, but it whirled from her grasp and fell into the darkness. One of the wheels loomed out of the sky and flashed past her head so close she could smell rubber. The Wabbit tried to see what lay beneath the bridge but it didn't seem to be water - it looked more like concrete. He gritted his teeth and called out to Lapinette. "Brace in the unexpected event of a hard landing," Lapinette gripped her billowing frock and shouted against the roar of the wind. "I'm all braced up." Something red loomed out of the darkness and both of them saw it. The Wabbit spread out his paws. So did Lapinette - but the object veered the Wabbit's way. With a single swipe, he grabbed it and held it tight. "It's the red button!" "What are you waiting for?" screamed Lapinette. "Hit it!"
at April 08, 2019