3. The Wabbit, Lapinette & the River Wild 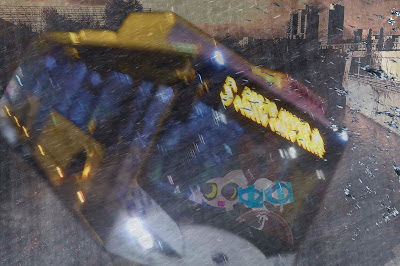 The bus careered down the River Po but when it reached the mouth of the Doro it swerved left and headed across the city. Torrential rain lashed the windows. "Never mind the weather," sang the Wabbit from gritted teeth. It grew chilly inside and the wipers gave up. "As long as we're together," trilled Lapinette. Lights flickered but then held steady. Headlight beams lit the churning water that threatened to engulf them. The Wabbit grabbed at the steering wheel. He managed to budge the bus trajectory slightly and so avoided three bridges. Lapinette poked at the brakes, but there was no response. A heavy wake lay to the back of the bus. Waves washed over footpaths and up embankments. "We seem to have missed all the halts," laughed the Wabbit. "No-one's out tonight!" laughed Lapinette. "Do you think we're late?" grinned the Wabbit. "If we're late, we can take our time," shrugged Lapinette. As if in response, the bus lurched, wallowed for a second and stopped. Water rose above the windows. "Whoa, steady on," groaned the Wabbit. Lapinette jabbed at the throttle. The bus lifted, then skimmed along the surface, bouncing across turbulence like a hydrofoil. But a subterranean canal loomed fast. The Wabbit looked at Lapinette. "Over or under?" Lapinette jumped with both feet on the throttle pedal. "Over the top ..!"
at April 03, 2019