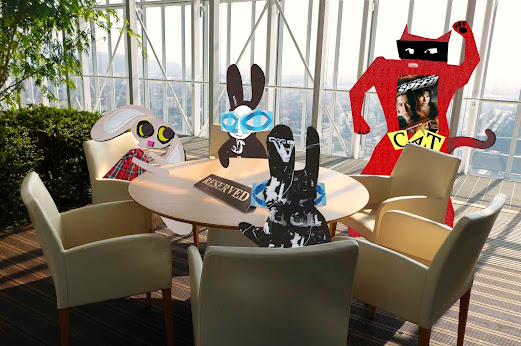 The team assembled for the Adventure Caffè. This time it was in the restaurant high atop the SanPaolo building - and that day, things were quiet. As usual, Skratch was late, because he'd taken time for a prowl around the edge of the viewing platform. This was the highest building in the city and now he was excited. "Hello, hello!" he meaowed. His tail threshed on the floor and he unleashed a delighted screech. "What about our last Adventure?" asked Lapinette. Skratch sat down. "It was in the realm of the hyper real." Everyone leaned back except for the Wabbit, who grinned and called for aperitivi. Skratch continued. "The first effect of the hyper real is vertigo of detail." Lapinette recalled her fall from the bus and nodded vigorously. Wabsworth chipped in. "That is related to simulation where documentary is expressed as narrative." Lapinette giggled. "You speak of the Nouvelle Vague." Skratch purred. "Not exactly. The adventure was rhapsodic as suggested by Barthes. It ran in the poetic register. But the structural dimension gained autonomy, allowing signs to interchange independently of narrative."  The Wabbit rapped on the table. "So the chocolate rabbit moved within the poetic register." Lapinette jumped from her seat. "That granted him desire to drive the bus." "Well I wouldn't stand in his way," smiled Wabsworth.


[Based on arguments in "How a Film Theory Got Lost and OtherMysteries in Cultural Studies"  Robert Beverley Ray. Indiana Press.]
at April 22, 2019