1. The Wabbit and the Interesting News 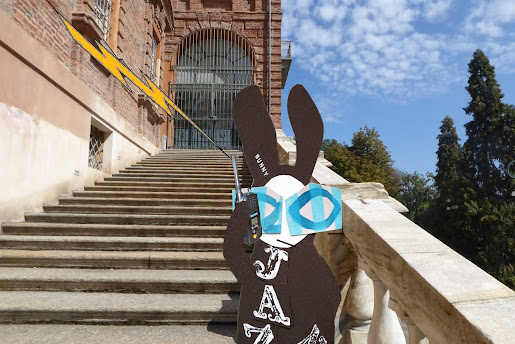 When the Wabbit was bored, he often hung round the back of Castello del Valentino. The castle now belonged to the Polytechnic and he could sit on the steps and listen to office chat and grin. The Wabbit wasn't an office rabbit in the slightest. His own desk was piled high with uncompleted paperwork and since he was between missions he had plenty of opportunity to catch up. Instead, he sat on the steps in the sun and wondered where the next mission might come from. He yawned and stretched his paws. "Busy busy busy," he murmured. His radio crackled and spluttered. He pulled it from his fur and pushed the talk button. "Sting Dem Radio. Yuh a luk fi DJ Wabbit?"  Wabsworth's voice whined from the speaker. "Very funny Commander, but we have a situation." The Wabbit laughed. "What kind of situation." The radio whined and the Wabbit jabbed 'talk' a few times and tapped the unit on the wall. "It's a carrot situation, Commander," said Wabsworth. The Wabbit sat down and sighed. "Don't overdo it with the carrots, Wabsworth. Just get to the root of the matter." The radio crackled again. "It's not a Club thing, Commander. It's a dangerous carrot incursion." The Wabbit waited and the radio fell silent. Then it hissed. "Are you still there?" "I'm waiting," said the Wabbit. "You'll have to see it for yourself," said Wabsworth. "On my way," sighed the Wabbit.
at April 24, 2019