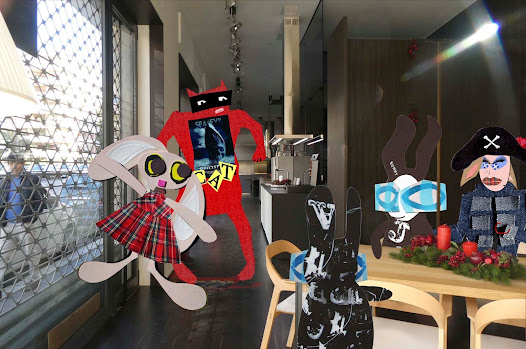 The Wabbit had spotted a new caffe and given everyone the address. Captain Jenny arrived first and sat down. She looked around for the bar. Wabsworth drifted in and turned to greet Lapinette and Skratch the Cat. Then he spoke to the Wabbit. "Here's Skratch to tell us all what kind of Adventure you just had." Skratch purred and cast an eye over the interior. "Wabbit, I must tell you I don't believe in ferries." The Wabbit was nonplussed. Lapinette hung on the door. "Skratch means you were in a bit of a ferry tale." "Ah," laughed the Wabbit. "I suppose I was." Skratch purred, "Through varied adaptability and intermediality, the ferry tale offered cultural specificity." Everyone nodded knowledgeably. "Yet it transcended time and space," continued Skratch. "Because it had heterotemporality," suggested Wabsworth. "And hereotespatiality," added Lapinette, "since it narrated the space of location but left little residue." Wabsworth had been reading. "The tale evokes an imaginary space but one which is predicated on concrete socio-political events." The Wabbit clapped his paws. "Our ghost ferry was both real and unreal. It existed on paper, in accounts ledgers, and in carefully annotated governmental memoranda." "That," stated Jenny, "is a kind of reality." "Real people got paid," said Lapinette. She pirouetted in the doorway. "Talking of pay, where's the drinks?" asked the Wabbit. Lapinette started to laugh. "Wabbit, this isn't a restaurant - it's a furniture showroom."
[Inspired by Fairy Tale Films by Pauline Greenhill.  Children’s Literature, Film, TV, and Media, Interdisciplinary Approaches to Literary Studies ]
at March 25, 2019