5. The Wabbit, Jenny and the City Spooks 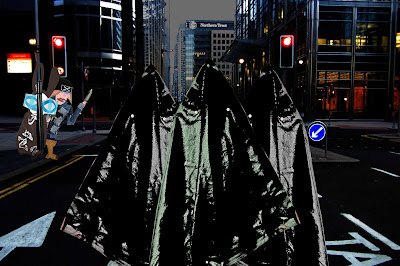 Pirate Jenny and the Wabbit followed them through the city. The spectres paid visits to a series of financial buildings and each time they emerged they appeared to have changed. Now they wore cloaks. Facial features emerged. Eyes started to glow - dimly at first but brightening after each visit. The leader waved vestigial arms and beckoned. They called on more buildings, floating through marbled halls. They met no resistance. Nothing was an obstacle. The leader turned green and he seemed to slither on slime. The Wabbit grimaced and his nose twitched. He could smell an awful stench of seaweed and algae and rotting wood. Jenny touched him on the shoulder and drew her weapons. "They be collecting the unsuccessful souls for transport. They be paralyzed and absorbed into these creatures." "How many?" gasped the Wabbit. "Could be hundreds, maybe thousands," replied Jenny. The figures grew bigger and swept their cloaks wide as they gathered more souls. "Can they be vanquished?" asked the Wabbit. "There's only one way," said Jenny, "But we need a deid bell and sulphur soap." The Wabbit watched the cloaked figures melting in and out of doorways. Now they were all completely green and stank like a thousand hulks. He nodded. "I'll get the bell, you get the soap."
at March 13, 2019